Hey everyone, so harmj0y released a bunch of cool C# tools about a month ago here: https://www.harmj0y.net/blog/redteaming/ghostpack/.

Today, I used SharpRoast from the released tool set which is a C# implementation of Kerberoasting and wrote a crappy bash one-liner that will parse the output into hashcat format for you to crack!

Some key things that make Kerberoasting so effective:
1. Any user on the domain can request these tickets.
2. You do not need to be a local admin on your machine.
3. Offline cracking so you don't have to worry about locking accounts out.
3. People use shitty passwords.

The output of SharpRoast gives you the SamAccountName, DistinguishedName, ServicePrincipalName and the Hash (in hashcat cracking format). The only issue is the hash is broken across multiple lines with a ton of whitespace that you have to delete before you can throw it in your cracker. 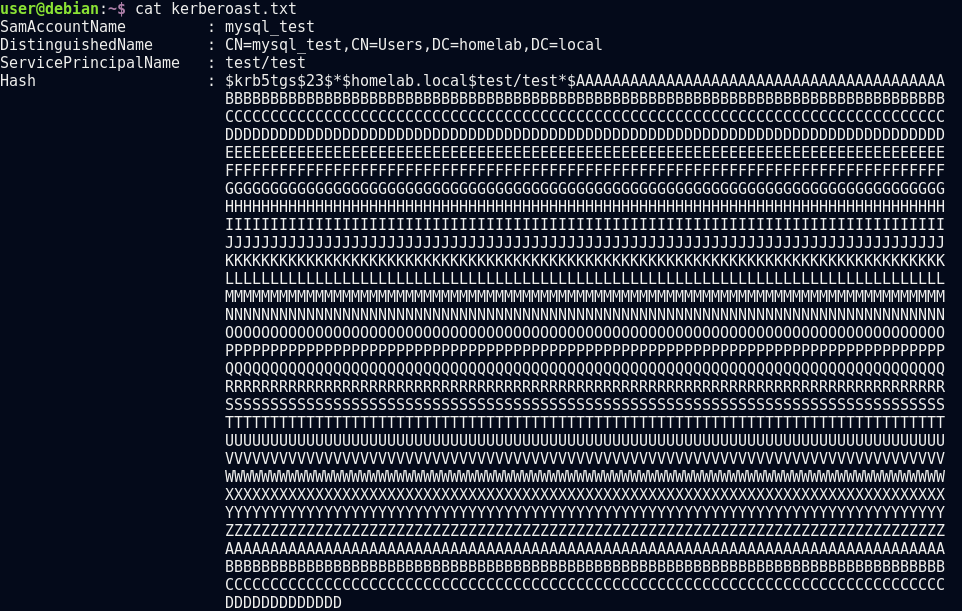 This is an example of the output of a single hash from SharpRoast. Now imagine manually parsing multiple of these into one lined hashes! That'd be a nightmare.

I know this isn't the prettiest or most efficient way to do this, but hey it works! Here's the one-liner:

Some shortcomings:
1. There's a newline at the beginning of the file, you can just manually delete this.

2. The part where you 'grep Hash -A 29', 29 lines may truncate or capture too many lines depending on your ServicePrincipalName and DistinguishedName. Play around with this number to make sure you're capturing the entire hash.

And just like that you're ready to fire up your cracker and hopefully crack the hashes for some plaintext passwords :)

Thanks for reading! Hope you learned a little something about Kerberoasting and how it can be used to further your access on a Windows domain. If you spot any errors, please let me know on twitter or by email!